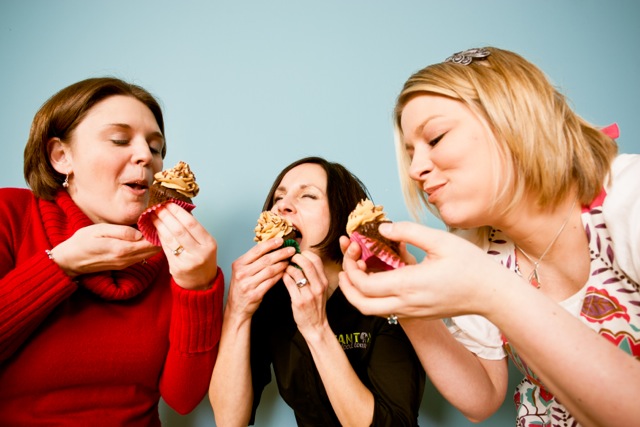 During our 10th season (2022) we will offer some fun throwbacks – Like this photo shoot with cupcakes! In 2011 and 2012, contestants submitted interesting ideas for desserts that symbolized Canton. The winning combos were made into pies baked by Rachel Hogue, and cupcakes baked by Kristina Belliveau. These wining desserts were featured on Canton Food Tour outings that first year.

Here is the inside scoop behind the picture:

Original Post from February 2012 – When our friends at A Studio suggested a photo shoot for the Flavors of Canton Contest, I thought, “Cool!”….So Saturday afternoon I walked into the studio and began chatting with friends. Suddenly I heard clicking in the background. “Who was up first?” I wondered as I swiveled my head.

There was Cindee, crouched on the floor, snapping away at the stars of the show: A trio of cupcakes ready for their close-up. All decked out, icing swirled high set in a beehive, sprinkles a-sparkle in the flash of camera bulb. Next was the pie, feeling ever so UN-ugly that day (Rachel’s Ugly Pies). Cherry glaze poked through the lattice, determined to get equal time next to the scene-stealing flaky golden crust.

Finally it was our turn, mere mortals up against the deliciousness of chocolate cake, fruit filling, and every variation of sugar imaginable. How would we rate? Posing with the creations was a lesson in patience, but soon out came the forks. Oh yes……The darlings looked great – but how did they taste?

Fast forward to today:  You can still get ugly (and delicious) pies! Check out “Rachel’s Ugly Pies” Facebook page.

You’ll find Kristina working at Leadership Stark County, maybe not baking for the masses, but certainly finding time for family fun in the kitchen!